The both infamous and prestigious Gouden Kabouters are going global; The ennobled garden gnomes with a gold spray tan are ready to judge international festivals, clubs, Dj’s and their haircuts. Besides all the fun and craziness that surrounds the Gnomes, winning one is also quite a big deal.

If this sounds like abracadabra to you, you probably haven’t been hanging around in the Netherlands much. De Gouden Kabouters (Dutch for Golden Gnomes) have been judging our nightlife for the past 15 years. It all started as a joke in 1995 as an attempt to bring back some humor in the club scene, that was becoming increasingly over-commercial and serious. And since then the kabouters have been poppin’ up everywhere, rewarding clubs, dj’s and labels with the quite hideous golden gnomes. The Gnomes have become the most important award ceremony in Dutch nightlife, being the self proclaimed “Incredibly Unofficial Oscars for the Club Scene”

Now, 15 years later it’s time for the Gnomes to go global and rate how the club scene is doing internationally. And throwing the ennobled garden gnomes out while they’re at it. Having built up an experience for 15 years, plus the fact that the crème de la crème is present at the Amsterdam Dance Event, made doing an international show a bit easier. And that’s why the first international Golden Gnome Awards shall be held on the opening night of ADE, Wednesday the 20th of October at Paradiso. The event is a collaboration between ADE, DJ Fanclub and Paradiso. 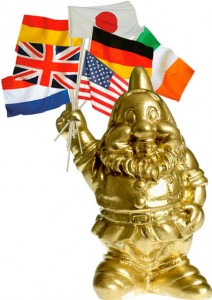 The people behind de Golden Gnomes didn’t just come up with the gnome alone for the award show. The gnome was just the first part of the prank. Adding categories like Noisy Gnome (club with the best sound system), Most Loveable Agent, Underground Gnome and Sexy Gnome, they try to stir things up some more. And with winners such as Deadmau5 this year, Richie Hawtin in 2009, Underworld in 2002, Ricardo Villalobos in 2005 and even the magazine you’re holding right now (for best dance website), new winners of the Gnomes are in pretty good company.

Jack Undercover (Yes, the famous DJ!) of DJ Fanclub fills us in on the nominations that are known at the time of writing this. In the category Noisy Gnome three clubs from Berlin are going to fight each other. Bargain, Tape and Watergate. They will have to compete with Manchester’s Sound Control, Frankfurt’s Robert Johnson and Amsterdam’s very own Air and Studio 80. When asked if the international Gnome Awards will replace the Dutch Kabouters, Jack replies: “No. The international show will be intended more for people working in the scene, who are largely represented at the Amsterdam Dance Event.”

Having been working with the Golden Gnomes for the last 15 years, Jack has seen a lot. “About seven years ago, Miss Monica won the Life time achievement Gnome. She was ill for quite some time before that, and when she came to the show to receive her Gnome, the entire audience stood up from their chairs and clapped for minutes. It brought tears to her eyes, and ours”, he says. “The Audio Bulley’s also amazed me. When they won the Gnome, we asked them to make a clip to thank us, just like Underworld did the year before. But they wanted to come and pick it up themselves. And perform afterwards.”

Also a part of the Kabouter-tradition, are the less complimentary categories, like worst dressed DJ, Worst Hairdo and Worst Place You’ve Played At. Awards like this usually land well here and even get picked up. What it will do to the international crowd is still to be seen, says Paradiso’s Maz Weston when we talk to her about it. “But also categories like Sexy Gnome. You never know how some DJ’s will take being nominated for that.” 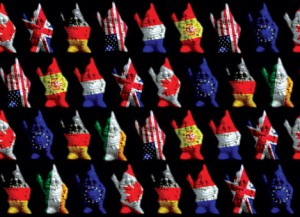 When we talk to Maz the nominations are almost done, which is done by insiders and experts of the three organizations. “That way we get a very broad insight for the different categories”, Maz explains. “Early September we have a shortlist for each category, and then it’s up to the voters to make their choice.”
Give your Gnomes to the DJ, club or festival you want at www.goldengnomeawards.com

Tickets for the International Golden Gnome Award show are €15 (Paradiso membership included)
and free if you have an ADE pass. Presale via paradiso.nl.
Doors open at 8 pm.